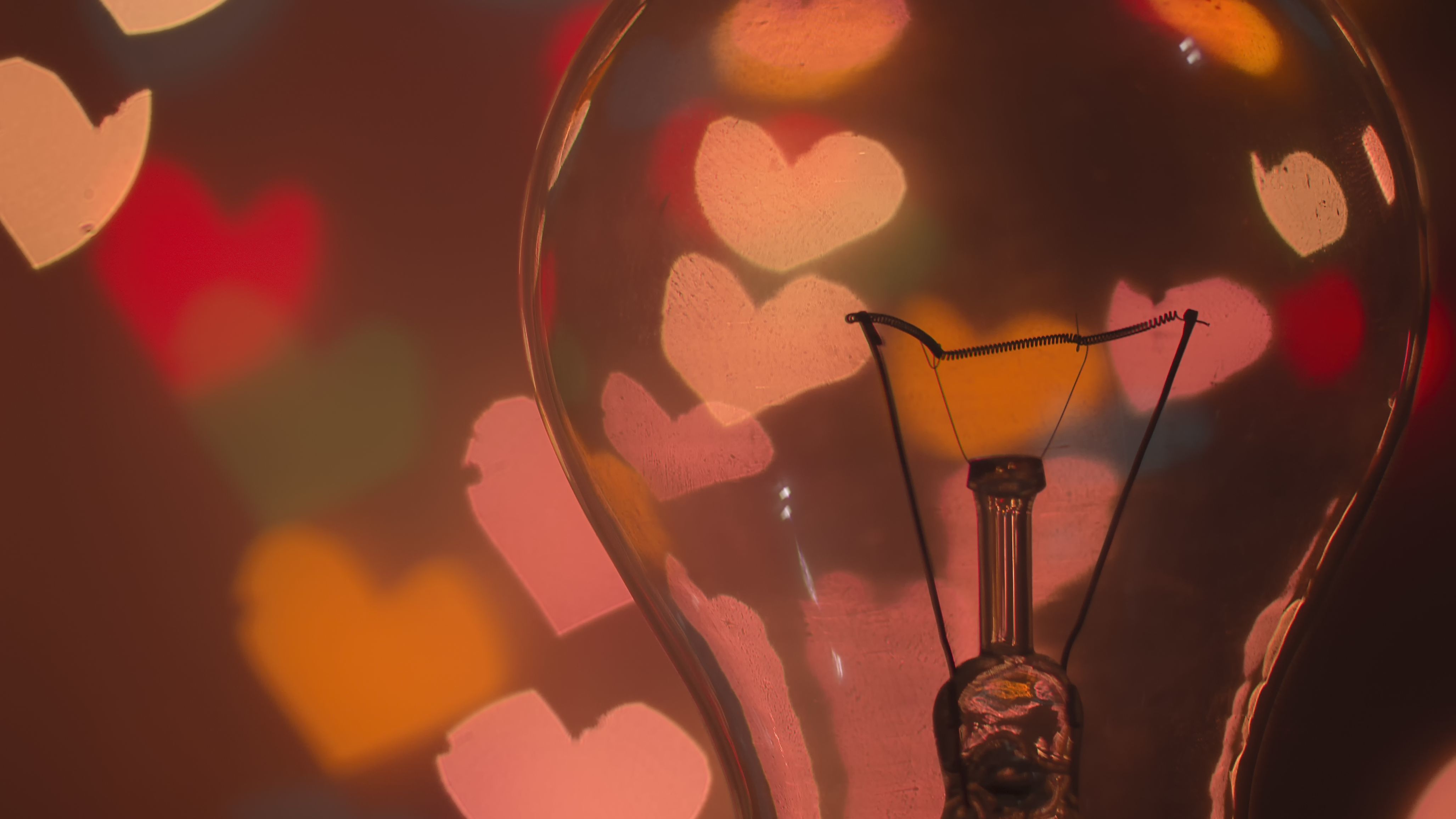 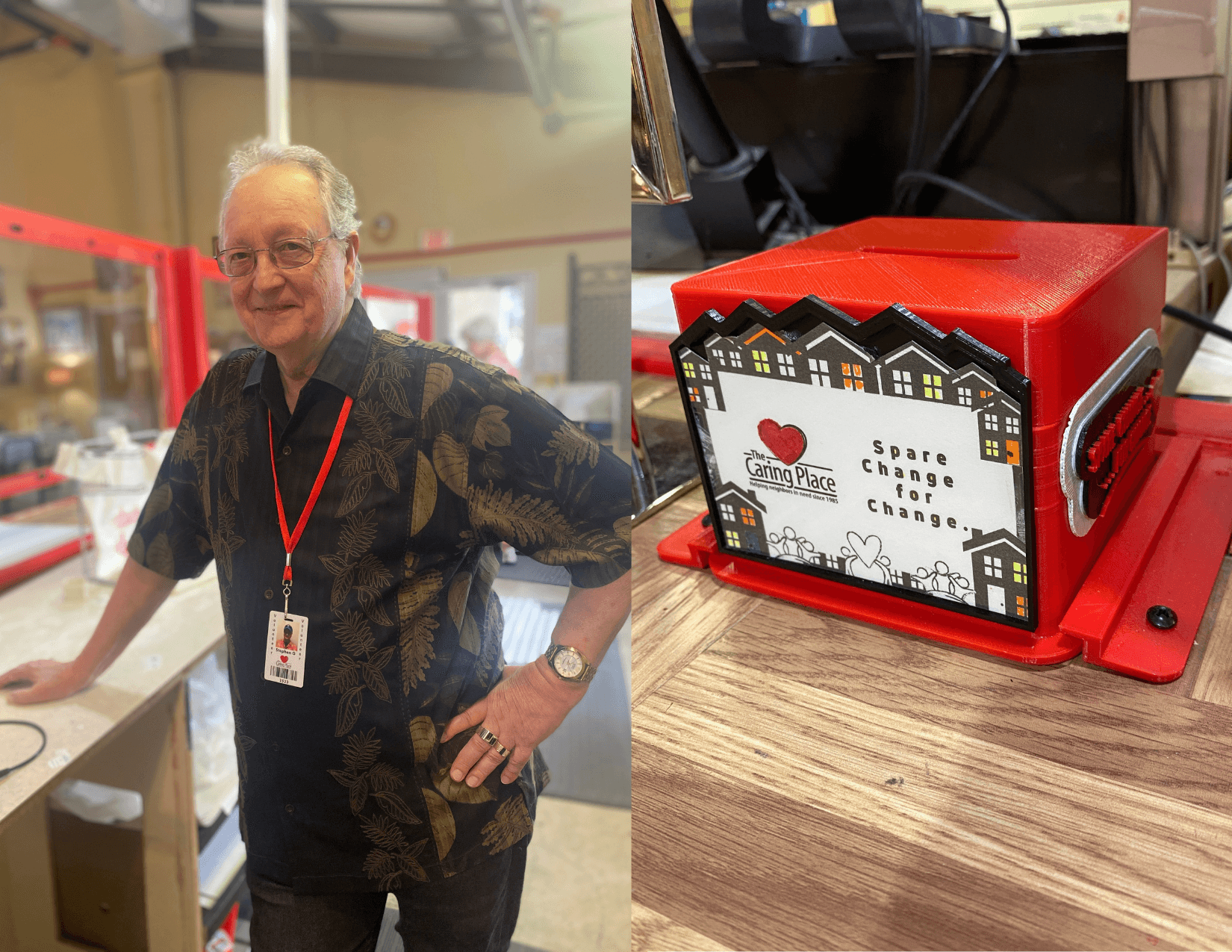 “Spare Change for Change.” That’s what the little boxes that rest on our cash register wrap at the front of the store read. That means if you pay in cash and receive change back, you are welcome to place it in the red box. That change is submitted as a direct donation to The Caring Place. Over the years, we have had several iterations of change boxes at the registers. Often they are made from little cardboard boxes that come through our Donation drive though. This summer, however, we felt we received a donation box upgrade because one of our volunteers made us something special. Stephen was that volunteer.

Stephen and his wife, Nancy, work as cashiers on Fridays. Nancy usually volunteers in the Boutique while Stephen mans his cash register in the main store, not because they don’t like each other Stephen says. They celebrated their 50th anniversary this year and have known each other since high school. He and Nancy do almost everything together, including years of volunteering, and they like it that way. We are thankful that faithfully volunteering at The Caring Place is one of those activities they do together.

Stephen says as a cashier he noticed our cardboard change boxes were always falling on the floor. They were always in the way, and the change was pouring out after each topple. Stephen created a prototype on his 3-D printer to solve our donation change box problem. After approval, Stephen went to work creating a new box for each register. The new box is red and black with a coin slot on the top like our old ones, but there are a couple of details which amaze us. The underside of the box has an opening with a twist-to-open mechanism. Additionally, the box slides into 3-D printed guide rails to keep the box in one location on our counters. When we need to empty the change we simply slide it out, turn it over and twist the opening cover. Change no longer accidentally falls out of the box when we are handling it, and the box no longer finds itself shuffled all over the counter.  Success! I should add that this was a success with several little branding details that made this Communications Manager happy as well!

The creation of this box may seem like a simple thing to solve a tiny pet peeve at the registers, but it’s also a reminder of the many special skills of our volunteers. One of Stephen’s career paths was as a teacher. He developed an engineering program at a high school in the San Fernando Valley in California that included 25 3-D printers, robotics, laser technology, and other engineering or architecture tools. A Career Technology Education teacher was just one of Stephen’s jobs, but it was his favorite job. He says his 3-D printer these days is fairly simple, but it does the job. Stephen already has another project in mind for us. After all, as he says, “You are only limited by your imagination.”

As a cashier, Stephen loves talking with customers. “It’s a good job, a fun job, a worthwhile job, working in a great place. As a retired person you really love coming to volunteer here.”

Stephen shared with me that the board members he has spoken to are very excited and committed to the mission at The Caring Place. He loves how everyone is so nice and friendly, something Stephen says could just be because Texans are so friendly. There’s a good chance there are others in our community just like Stephen though. Folks that have a history of volunteering, people who have some specialized skills, and individuals who love being where nice and friendly people are. If that resonates with you, perhaps volunteering at The Caring Place should be on your list.

ALL TCP LOCATIONS OPERATE ON A 2-HOUR DELAY FRIDAY, FEBRUARY 3.

All TCP locations are closed on Monday, February 20th.

Our Amplify campaign has begun! If you are planning to make a monetary donation, we ask that you please do that on our Amplify page HERE. All donations are being matched on that page only until March 2nd at 6:00 p.m. THANK YOU!